A few words about me by me… 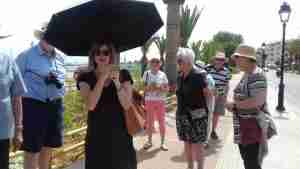 Cretan History and Culture. ( A letter from Aris Tsantiropoulos | Assistant Professor of Social Anthropology in University of Crete)

September: Private tour on Minoan Culture and Knossos to John Blair and family when visiting the island of Crete.
July: Interpreter of the international-Energy-conference-of-Crete-schedule, 8-10 of July.
Speakers:
Dora Mpakoyanni previous Minister of Foreign Affairs of Greece.
USA Ambassador Payet
Israel Ambassador
Minister of Energy and environment of Greece and Egypt.

January: A guest speaker presenting the Country of Greece and its history for MEJDI Tours. A virtual cultural-historical tour of Greece from Ancient times until Today and the evolution of Democracy.

February official interpreter of the Greek government and Prime-mister Mitsotakis in Crete.

Associate advisor of Elli Lyraraki in the Paris Fashion Show

Interpreter of the Seminar of Simone Caporeli held in Heraklion Crete.

Speaker, Host, and coordinator of the Fed Hatta conference held in Athens for ITTA.(Greek Tour agency Association,Minister of Tourism,General secretary of Tourism of Greece, Aegean  Airlines, Ambassador of Israel and Tourist Organization of Israel)

Working as an interpreter for conferences and meetings held in Greece.

Tui School & College of Guides of Greece from Athens, American School of Archaeology

University of Crete / Education of People of Greek Origin (W.I.I.S). EU Leonardo Program The Centre for Professional Development, Rethymnon on the EU Leonardo Program “Introduction to the Civilization of Crete” covering the months of November and December.

Presentation and Introduction for Professor Jacob Dempsey of BrownUniversity NY re: his most recent book on Minoa.

US Legal Groups which included the firm Fulbright and Jaworski,International Lawyers, Houston

Thomson UK Back to back, weekly tours for guests with special interests. This entailed guiding archaeological sites, planning tours, organizing routes, timetables, transfers, and responsibility for the health and safety of the guests.

Setting up “AIDS Awareness Young Citizens Org.”, together with UN in Africa and Bi-cultural children’s program in Hania Crete and Botswana, Africa: Setting up Workshops in Crete and Publishing their work and Art.

for our tour services

If any of you travelin’ women are going to Crete, Santorini or mainland Greece, and are looking for a way cool woman guide, I highly recommend Ioanna Kalyso Glypti. She has incredible wisdom on so many topics, including Greek history, archaeology, Divine Feminine, mythology… and the list goes on. Ioanna can be contacted thru her small boutique travel company she recently formed with a few colleagues called 1618Travel.com

An elaborate, detailed historical overview as I have never hoped to experience.

Smart lady, knows her stuff and because she really loves what she does, she does it so well.

I would recommend anytime!

A tour to the Island of Spinalonga with Ioanna was a memorable tour. A heart warming tour, an eye opening tour, not only into Crete and Spinalonga, but also an experience of ones inner soul.